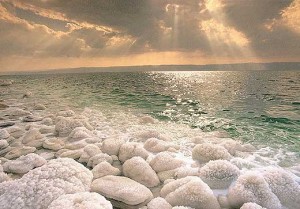 Situated in the center of the Syrian-African fault, the Dead Sea is the lowest point in the world (417 meters below sea level). The Dead Sea also has the highest salt concentration of any of the world seas, making floating in its waters effortless. The high salinity of the water in the Dead Sea prevents the existence of any life in the water, hence its name.

The beautiful Ein Gedi Oasis, mentioned in Shir Ha’Shirim, is the place where King David hid when King Shaul along with an army of 3,000 men gave chase. The area is filled with gushing falls and dense growth with many caves.

In the many caves within the tall mountains by the shore of the Dead Sea, Jews hid during Roman times. It was in one of these caves at Kumran where the Dead Sea Scrolls were found.

A symbol of Jewish Freedom, Masada, located on the Western shores of the Dead Sea, the lowest and one of the most desolate regions on earth, is a place of stark majestic beauty. It is also the site of one of the most dramatic episodes in Jewish history. Nineteen centuries ago on this gaunt plateau, a group of freedom fighters against the might of ancient Rome decided to kill themselves rather than submit to the oppressor’s yoke.

Nahal Perazim is a beautiful narrow gorge with high walls formed by flowing water eroding into the soft sedimentary rocks. After a 15 minute walk through the gorge, you will reach the Flour Cave, dubbed so because of the flour-like substance you will have on your clothing when emerging from it.