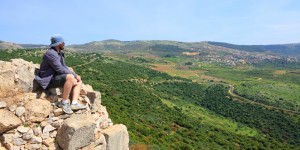 During the 5th century AD, the town of Bet Alpha built a beautiful synagogue containing one of the most beautiful and stunning mosaic floors discovered in Israel. Visitor to the site can watch a film presentation about life in the ancient village as well as the making of the synagogue’s mosaic floor.

The Gilboa is a mountain ridge above the Valley of Jezreel. The name is referenced in the Bible as Mount Gilboa, and it also lent its name to the second battle fought in the valley below, in which the Philistines defeated Saul and Israel (the Battle of Gilboa in the Book of Samuel). Every year, in early spring, the Gilboa Iris flower grows on the mountain, and visitors from all over Israel come to see the purple flower as well as the spectacular view of the Jezreel valley with its cultivated land and beautiful serene villages.

This Crusader fortress overlooking the Jordan Valley is the best preserved and only completely excavated Crusader-period fortress in Israel. 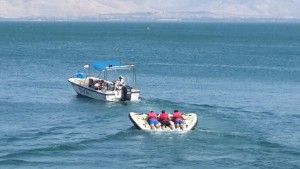 A splendid overlook of Lake Kinneret.

Originally built as a hot bath resort by the Romans (the hot water’s healing properties were recognized as an acceptable cure for a variety of ailments) Hamat Teveria later became the seat of the Sanhedrin (Jewish religious council). The remains of the synagogue at Hamat Teveria date to the time of the Sanhedrin’s use of the city. It is also the home of the oldest discovered mosaic in Israel. The hot baths of Tiberius are still in use today, though in a new, more modern facility, and are a popular spot for both foreign and Israeli visitors.

Tour the synagogues, courtyards, and shops of the mystical city of Sefat. Visit the Graves of the Ari Hakadosh, the Beit Yosef, the Alshich and others in the old cemetery. Dip in the Mikvah of the Ari.

One of the richest and most fascinating archeological discoveries in Israel, Tzippori gained fame when Rabbi Yehudah HaNasi moved to the city with the Sanhedrin (Jewish religious council), thus making Tzippori the seat of Jewish religious authority. Rabbi Yehudah completed the codification of the Oral Law into the Mishnah in Tzippori, and the scholars living in the city participated in the writing of the Jerusalem Talmud. Some of the primary excavations in Tzippori include a 4,500 seat Roman theater with a spectacular view of the valley below, a Crusader fortress at the top of the hill, living quarters from Mishnaic and Talmudic times and a number of Roman-period villas. However, the most extraordinary aspect of the finds at Tzippori is the abundance of exquisite mosaic floors. One villa in particular contains a beautiful and intricate mosaic of a woman’s face that has been dubbed the “Mona Lisa of the Galilee”.

Ride a cable car up to a magnificent view of the Hulah valley. Enjoy repelling, zip lining, and a trampoline.

At Kfar Kedem you can be a shepherd, plow your fields and bring in the harvest to the village threshing floor. Then grind the flour and bake your own bread. Join a donkey caravan heading to the hills above and end the day with a feast in the shepherd’s tent. Savor an experience from the time of the Mishna. Click here for their website.